A few weeks ago I had to take my cat Bertie to the vet for what was going to be a routine dental cleaning that then turned into a scary sequence of events.

At his last vet visit in March the vet inspected his teeth and observed that they could use a cleaning. To be fair, the vet said the same back in March of last year, but they wanted to do a blood draw to make sure that he’d be ok for any anesthesia. I can’t remember if they couldn’t do the blood work then, or if I knew the dental procedure was going to be more than I could have afforded at the moment, so I declined the blood work (I didn’t want to traumatize him by taking him back to the vet again just for a blood draw) and tried a variety of dental pastes and sticks to help clean his teeth. This time the vet said that he not only could use a cleaning but he also had the beginnings of the cat equivalent of a cavity, so we did the blood draw then and I started saving up for dental work.

The vet said that his blood work came back ok for surgery, so a few weeks later I took him in for his dental appointment. I was worried about the whole thing but put it down to nerves – it was the first time I was leaving Bertie at the vet by himself (I never really left him anywhere before where he wasn’t either at home by himself or with my family members to cat-sit him) and kept reassuring myself by thinking of this Hey Pais comic: 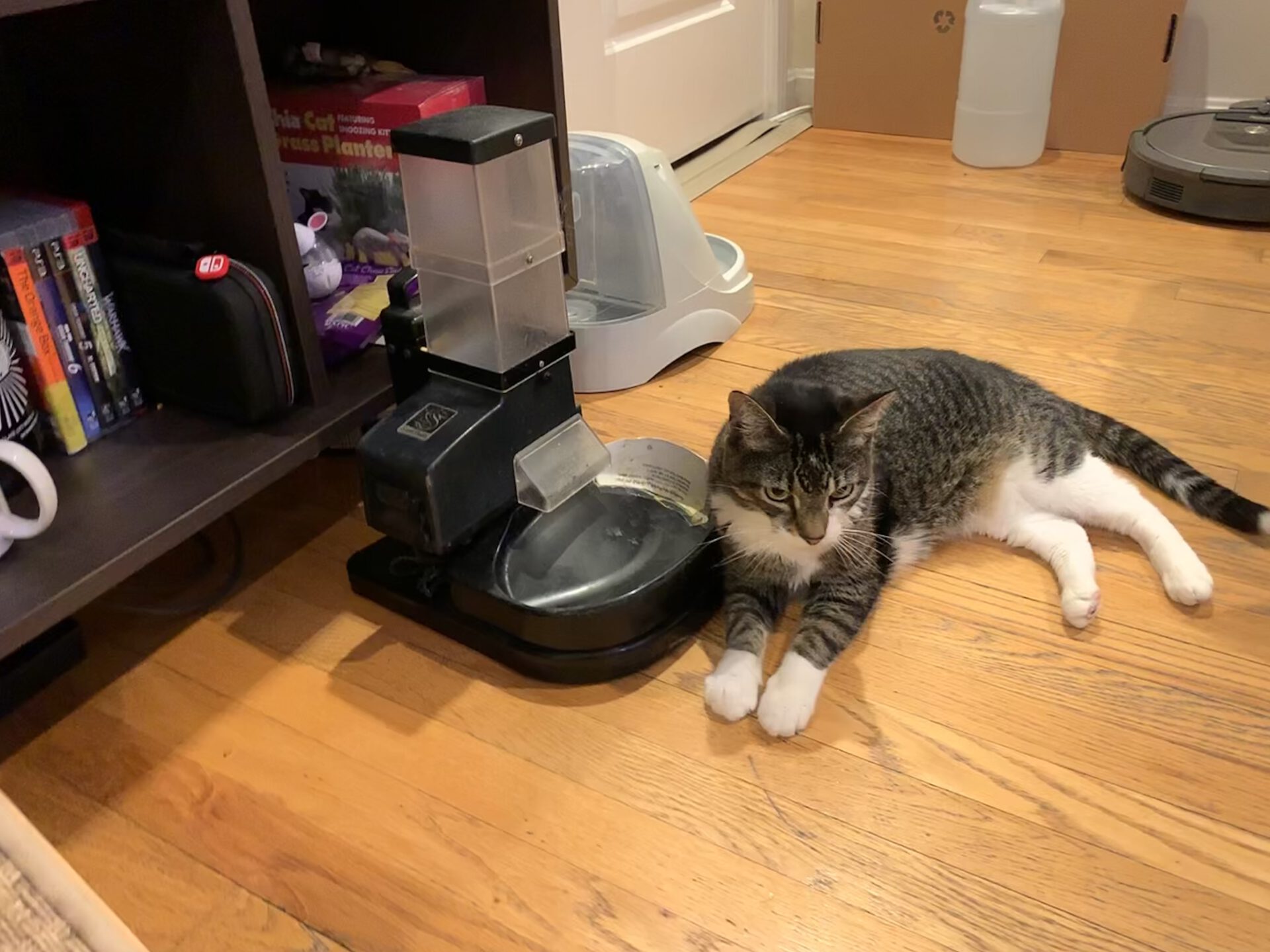 …said “see you later, Berts!” when he was carted to the back, and went back home to work until his surgery was over.

I worked for a bit and then got a call from the vet. First thing they did was reassure me that Bertie was okay but that they had some complications during the surgery and had to abort the process. Apparently his heart rate spiked during the anesthesia and the vet wanted me to take him for 24-hour monitoring or to a cardiologist! They gave me some cardiologist recommendations and I started calling around.

I found that one of the cardiologist’s offices was in Annapolis, so I figured that I’d make the appointment there as I knew where the office was and it’d be near my parents’ place, so I made an appointment for May 3 (almost two weeks away) and called the vet back. However, the vet wanted Bertie to be seen by a cardiologist even sooner than that or taken in for observation, so I called the cardiologist back to see if they had any earlier openings at any of their other locations. Luckily they had an opening that afternoon in Rockville! I picked up Bertie and took him back home for a few hours so he could eat before I had to take him back out in his carrier to see another vet. 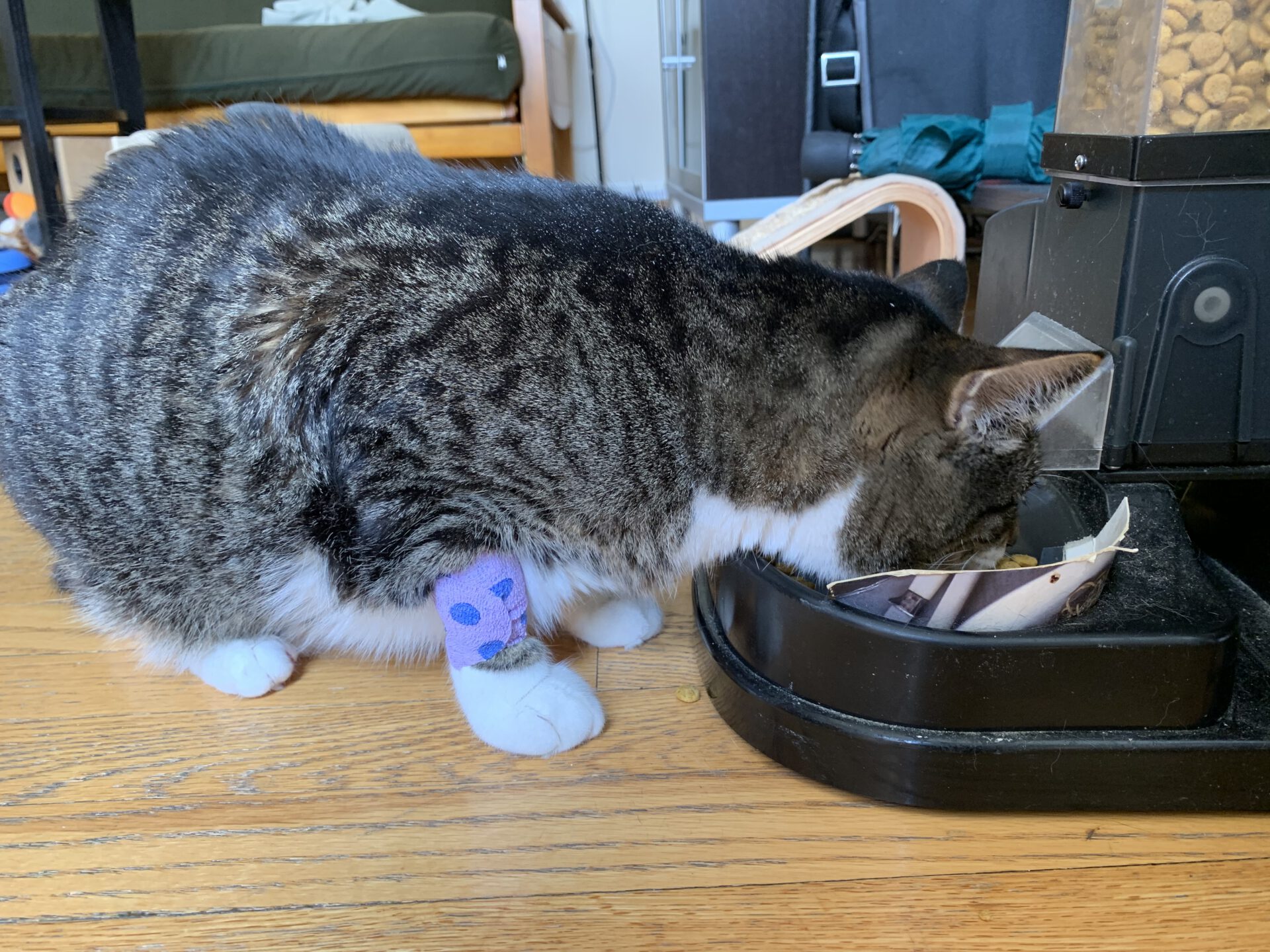 I was nervous going to the cardiologist because I didn’t know what their diagnosis was going to be and kept fearing the worst, but Bertie and I felt welcomed when we arrived. 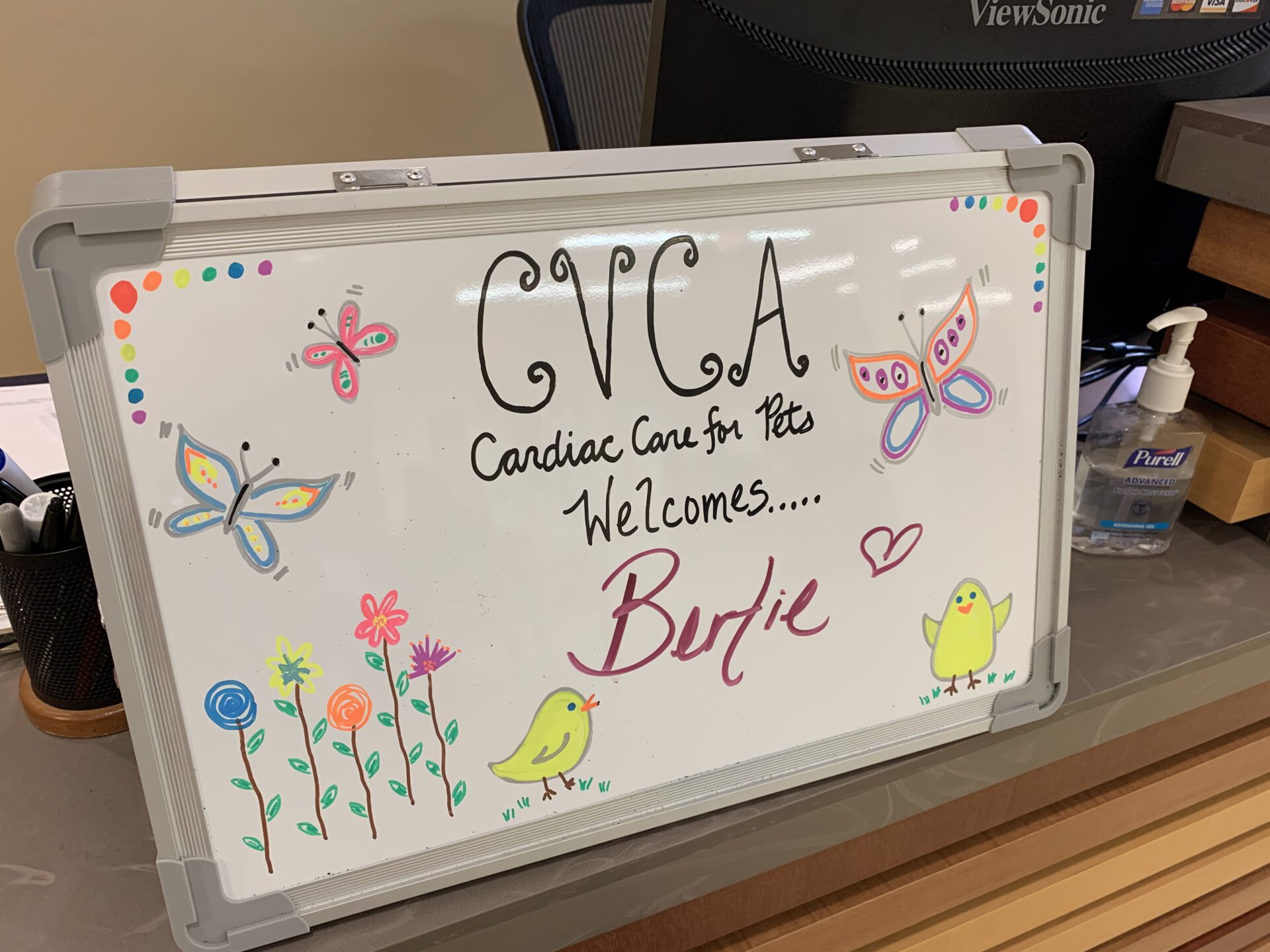 Even so, Bertie still didn’t want to be there and kept trying to hide against me. Poor kit! 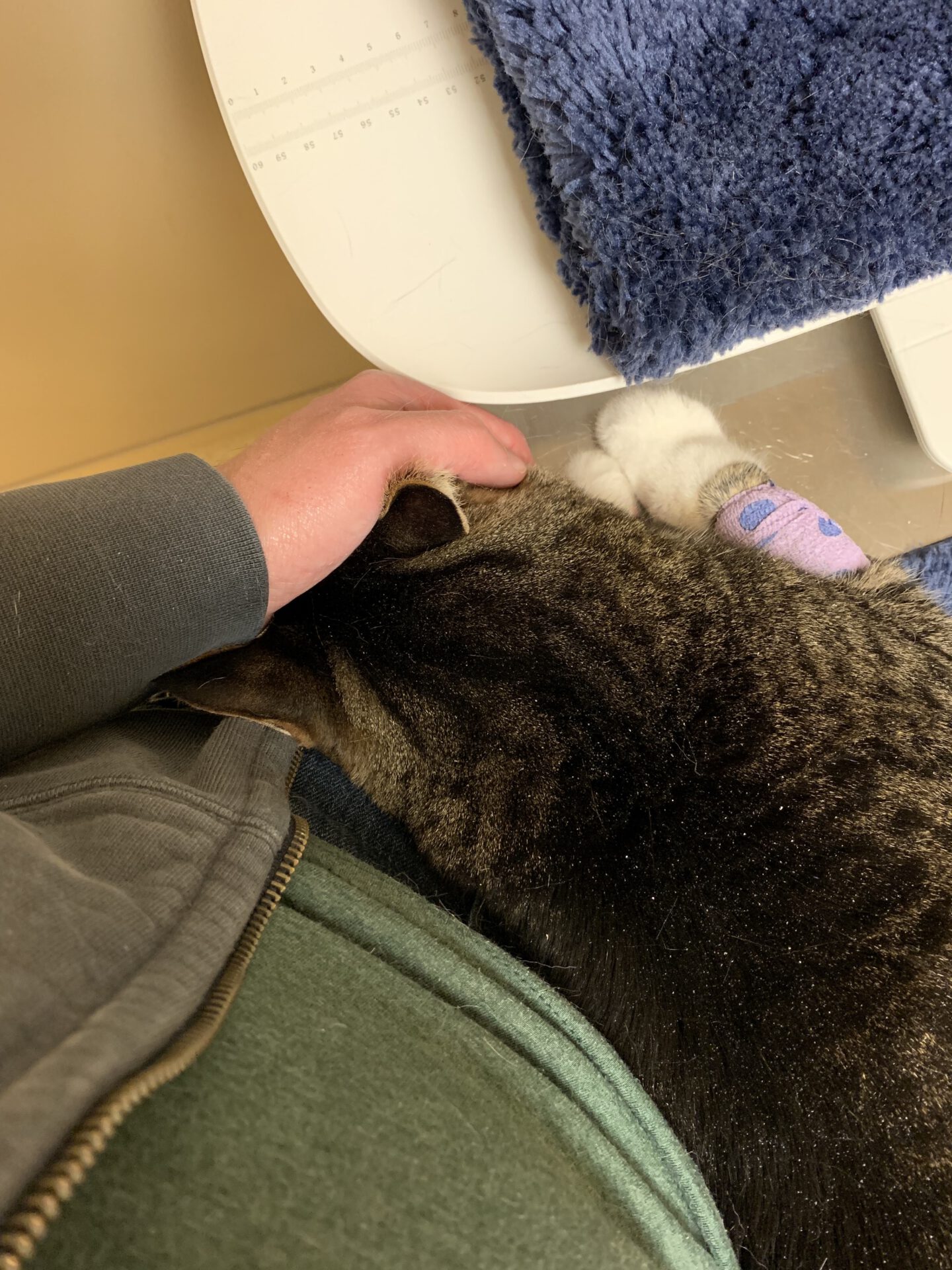 The nurse and cardiologist were extremely nice and helpful. They took his blood pressure (guess how? they have a blood pressure cuff that goes at the base of the cat’s tail!), gave him an electocardiogram (Bertie was very brave and didn’t complain), and then gave him an ultrasound (and he only complained very little).

I was nervous about the potential for blood clots as 15 years ago we had a cat named Gizmo who had a sudden blood clot and had to be put down as it paralyzed him so that was on my mind this entire time, but the cardiologist said that it appeared that Bertie was at a low risk for clots, so that was a relief!

When I had Bertie at the vet for his last checkup, the vet thought she detected a heart murmur or a-fib but we weren’t sure if it was stress-related (him being at the vet and all). The cardiologist confirmed that he does have a small murmur (a small leakage in the mitral valve, which is the murmur that the vet heard), the heart rate issue seems like it was a reaction to one of the anesthesia medications so they were going to advise my vet on alternatives, and suggested that if he needed dental surgery in the future to maybe take him to a specialist where they have the capability to do additional monitoring.

Even though the cardiologist visit cost $660 it was well worth the peace of mind to hear that Bertie was going to be ok. Plus Bertie’s vet insurance ended up covering about a third of the visit. It seems like he’ll have annual cardiologist appointments as the heart leakage is something that is fine now and doesn’t need medication, but can grow worse over time and may need medication in the future.

At least the worst thing that came out of it was him having to deal with the indignity of having his paw shaved, but he’s been told by a few well-wishers that it makes him look distinguished, as if he has a shirt-cuff. 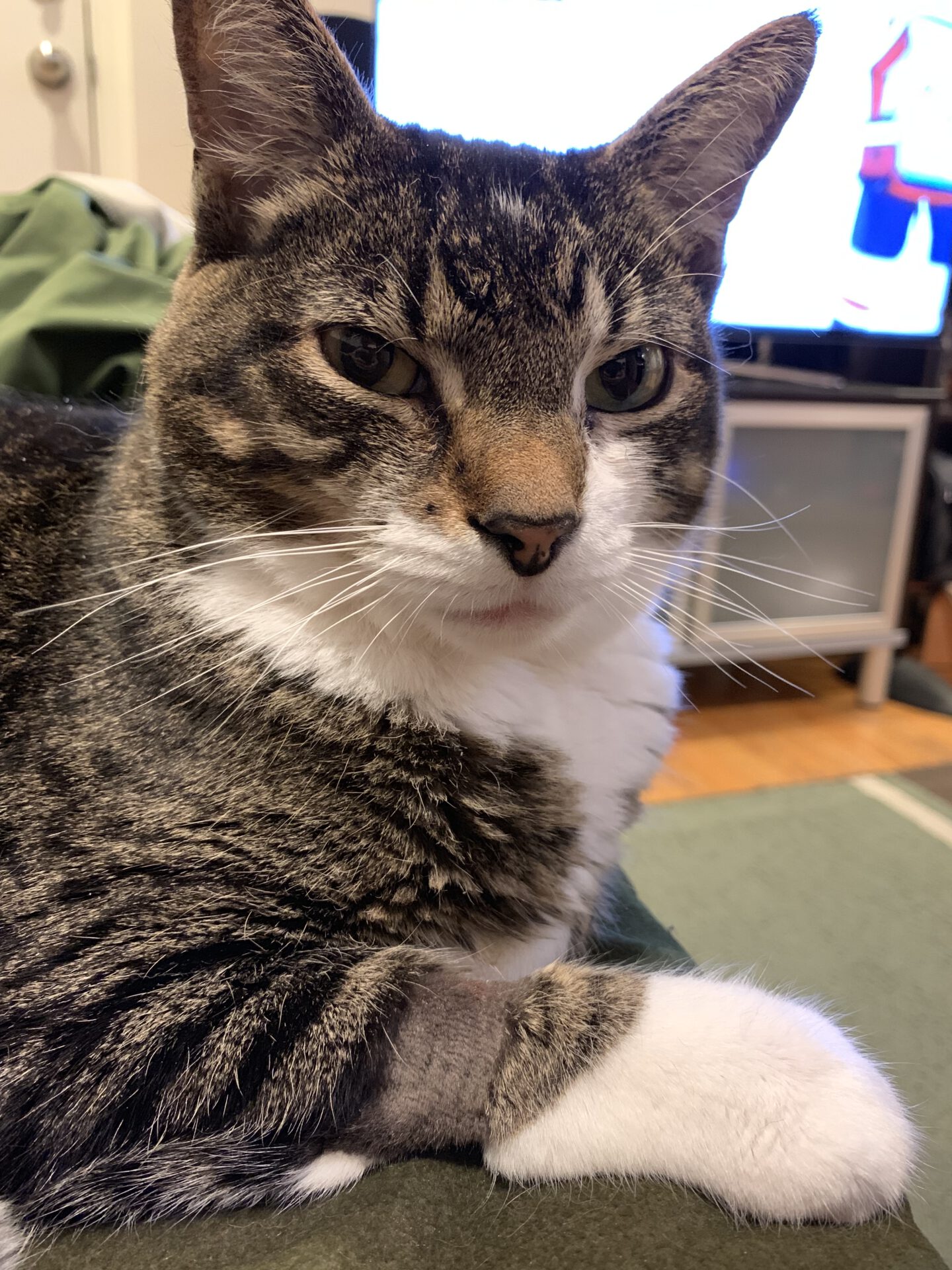 The vet called me back the next day to see where Bertie was (assuming he was still being held for observation) and asked how he was doing, but when I told them about the previous day’s cardiologist visit and how it went they were similarly glad to hear that all seems to be well. They also said that considering the circumstance, and since his tooth doesn’t really seem to be bothering him, there’s no rush to do any extractions. They were actually able to quickly clean his teeth while he was under, but they echoed the cardiologist’s suggestion that if he needs any surgeries in the future to take him to the animal hospital where they have additional support staff and equipment available.

I promised him I wouldn’t try taking him anywhere in his carrier for a while as two carrier trips to see two vets in one day was enough for this poor kit, but I’m happy he’s doing well. I was really worried there for a while that morning. 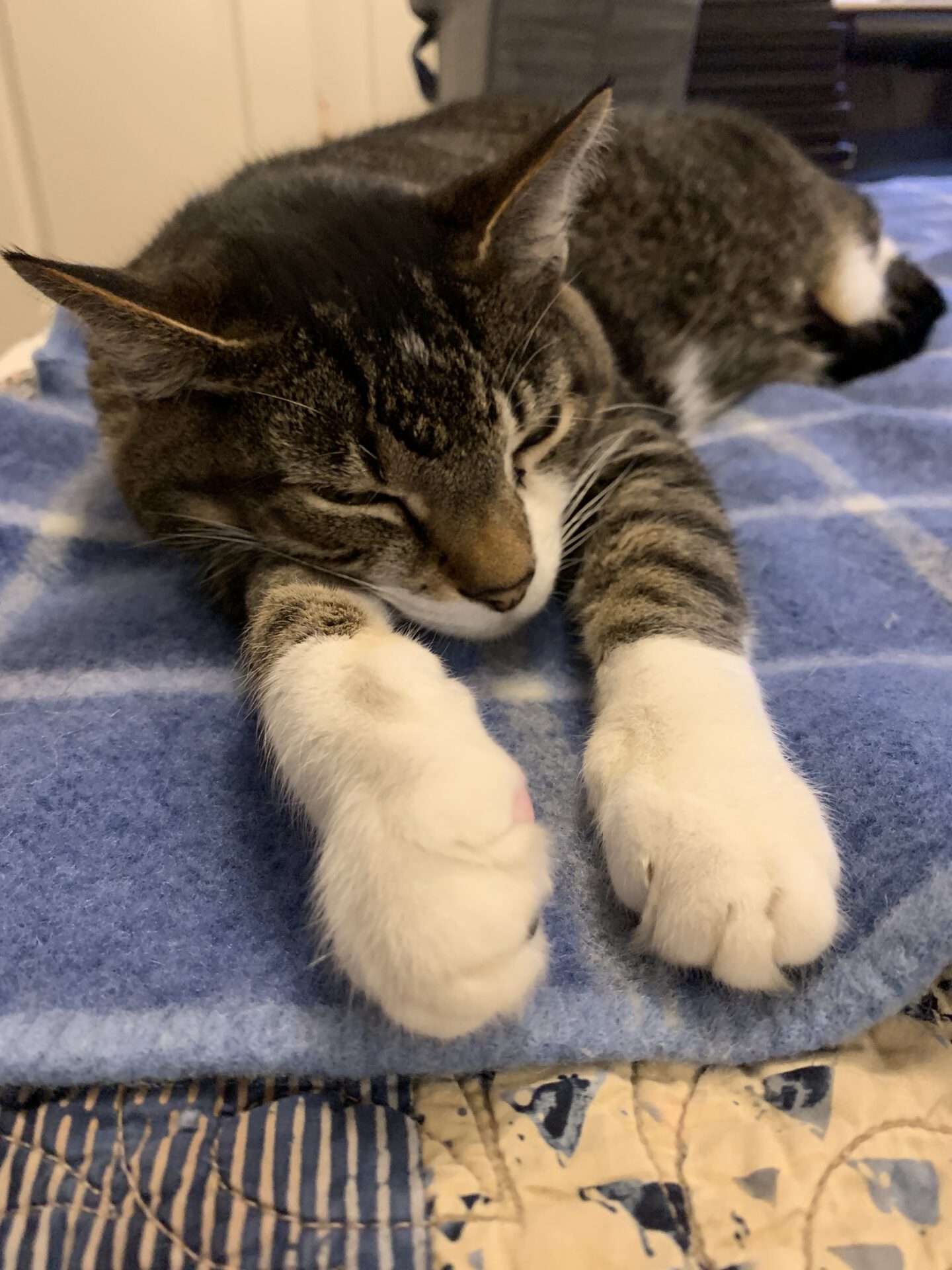