now i’ve been invited to the STS-135 tweetup at nasa headquarters thursday afternoon to meet the mission commander and mission specialist from the final shuttle mission. crazier and crazier. it’s gotten to the point where i got an invite to attend a film screening and q&a with the director later this week, and i looked at my calendar and realized i had shoulder-rubbing to do with fellow tweetup attendees at that same time. mister popularity, that’s me!

yesterday i went to a screening of the film “downtown 81” about jean-michel basquiat, it’s basically a day-in-the-life film of a typical scenester in new york city in the early 80s. the screening had a special q&a afterwards with maripol (who was once madonna’s stylist) and michael holman (who, well, did lots of stuff). it was a good film, and they invited the audience for drinks at a hotel bar afterwards, but i had stuff to do… and besides, my mind was too occupied with this cute girl who was sitting next to me in the auditorium at the corcoran, and if she wasn’t going to the meet and greet afterwards then i figured i might as well not either. 😛

i ended up going for a walk through dc, sat myself down on a bench outside the white house, and just sat and peoplewatched for a while.

i hopped on a bike from capital bikeshare at union station after the sun set and biked on a trail back to catholic university (where the closest bikeshare dock to my apartment is), then walked the last mile back home. it’s been a while since i’ve exercised my biking muscles, but it was a great night for riding. besides, i needed the exercise. more on that at the end of the post.

last week i went home for dad’s birthday on tuesday and he and mom and i went out for dinner at the macaroni grill, then home for dessert. we talked a little about the ken burns documentary on prohibition since we had all been watching it; if you haven’t seen it, i’m not sure if you still can, but you should watch it as it’s quite good. i remembered when i got my homebrew beer kit how dad said how an ancestor was arrested during prohibition – turned out it was my great-great grandfather arrested for making bathtub gin with/for his buddies, haha.

i had a dentist appointment on thursday, no problems found. good times.

apparently japan is recruiting bloggers to visit japan in exchange for blogging about japan. perhaps i might see about signing up… if i get accepted for this visit-japan-and-blog-about-it thing, then i’ll be more like tintin, boy reporter, since he also met politicians and celebrities and toured a space center while traveling the world and writing about it.

as for why i needed my exercise:

it was intimidating since i’d never fundraised on my own before (only did things like sell chocolate bars for the school, stuff like that), nor have i run a half-marathon before, and i wasn’t even sure if i’d be able to pay out of pocket if i had to, but since my dad’s cousin died this summer from cancer it made me more resolute that this was something i had to do. i’ve also had other relatives die from cancer, and i knew a coworker who died, and had some friends have friends that died recently or had friends of theirs who were diagnosed, so i figured i ought to sign up.

i emailed the contact on october 3, and he got back to me and i registered on october 4. on october 5, steve jobs died from complications from a tumor in his pancreas, and my reaction was basically “well, shit. at least it’s appropriate that i’m fundraising for the american cancer society, i guess?”

at the very least, by soliciting donations it’s helped me stick to my training schedule instead of figuring that skipping a day here or there won’t hurt any. sunday my training schedule was no running, just “strengthen”, so i went for long walks and that bike ride instead. i wasn’t feeling like going for a run today after work since i was pretty hungry and tired, but i went out there and did my 4.5 miles (ended up going for 4.69 miles altogether today). i said on twitter how it’s like adam jones of the baltimore orioles says: give 100% every damn day. then later, this happened: 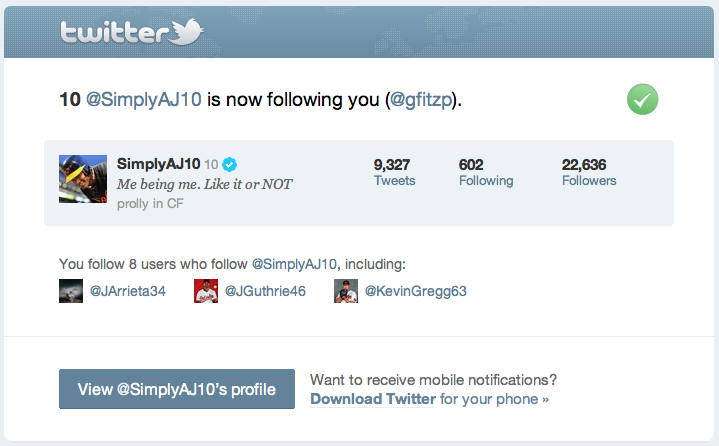 …i totally am forrest gump.

anyway – so, yeah, i’m trying to run a half-marathon and raise money while doing so. if you can, i’d appreciate any donations that you can spare; you can donate directly here. if you can tell your friends/coworkers/whomever you know about my race and fundraising goal, i’d appreciate that too.