on sunday i went to my parents’ house. we still hadn’t yet celebrated my birthday, and my sister anne was going to make me a cake. we had cake just a day or two before my actual birthday, but that one was to celebrate my graduation since anne wanted to make me a cake for that. so, i went home, visited with the family, played with the cats, and did some cleaning / reorganizing. mom was getting ready to give a bunch of stuff to charity later in the week and everything that wasn’t put away in my old bedroom was fair game. i couldn’t really go through my stuff too much, but i did find some things that made me wistful. i found my skatebag and kind of wished to go skating. i also found my old roller derby water bottle… and it still had water in it (ew).

we had steaks on the grill and birthday cake, but i didn’t eat too much since i was still feeling pretty queasy. mom brought up religion during dinner, and she and dad and anne had a discussion about it since anne said that her boyfriend is an atheist and mom wasn’t too pleased when she heard that. she’s still not very pleased about my decisions concerning religion (when she heard that my apartment is near catholic university, her reaction was “oh good! maybe you’ll start going to mass again!”. oh boy.), and after cake she ran upstairs and brought down a rosary for me for my birthday present. erm. thanks?

remember how i said how i wasn’t sure when i’d be able to get my own copy of the portraits framed? when i was at home, mom found that michael’s is having a 50% off sale on custom framing. not as good as the sale the last time (60%), but i’ll definitely take it. i ordered prints of the portraits on sunday and they should arrive at home tomorrow for me to take to get framed. mom wasn’t kidding when she said that they do sales on custom framing all the time, i guess. i never expected it to be this soon.

sunday night i chatted online with festive about my recent lj posts and how i’ve been feeling about carrie and my concerns and goals and so on. i came up with about a dozen or so things that i was curious about, or worried about, or that made me sad, or that i otherwise wanted to discuss. she suggested writing my thoughts down (as if i were writing a letter, but not to send) just to get my thoughts out. hence another reason why i’m writing again in my journal. i might post it here when i’m done, i might not.

i hope if she sees these posts that it doesn’t weird her out that i feel this way. :/ maybe i should create a custom friends group for when i make posts like this? i don’t know. i feel somehow like that’d be dishonest. argh.

i tried to figure out why i’ve suddenly been feeling a lot more emotional about the situation all of a sudden; i think a big part of my concern is that i’m worried that i won’t really ever get a chance to see her again except within the context of certain situations/events. i figured that now that i’ve finally given her this portrait that i promised that it’s a type of closure, and that now i won’t have any reason to see her except for maybe at derby bouts, and she won’t have any reason to see me for pretty much anything. i’m afraid that’s what’s going to happen, and i don’t like how i feel about that.

(i hope that i’m not being weird or creepy by wanting to still be friends. also, when the earthquake hit today, after i put a few general “zomg we’ve had an earthquake” messages out online, she was the first person i contacted to see if they were ok. is that weird? i feel that it could be interpreted as weird. :/ )

monday i woke up late for work; i woke up about 7 minutes before i was scheduled to be at the office, and it takes me about 45 minutes or so just to get to the office. i called in and took an hour off at the start of my schedule so i could shower and get ready for work and showed up at 9. at one point my boss said “you don’t look that great, are you feeling ok?”, and i said how i hadn’t been feeling that great for the past few days. “something’s been going around”, she replied. people with bronchitis, the flu, etc. i just felt like i wanted to go to sleep. at one point my coworker next to me needed my help, and after i assisted her she said “yeah, you don’t look well.” i thought about going home for the rest of the day, but wasn’t sure until just before noon when i figured, yeah, it’s time to go home. took the rest of the day off, stopped at the grocery on the way home to get some soup and other food, got home, felt sorry for myself for 5 minutes and ended up falling asleep for a 2-hour nap until around 3:30 when i was woken up by a car alarm. had some soup, watched some tv, suffered a headache. i planned to just stay in the apartment and rest, but festive had been on a free movie kick lately and had asked me if i wanted to go out to see a free movie over in crystal city. i was on the fence about it since i should have been resting, but i figured that either way i’d really just be sitting back and watching a screen, and at least a change of scenery and some fresh air might help me feel better, so i took some excedrin for my headache and she picked me up on her way to the outdoor movie.

the movie ended up being “500 days of summer”, and it’s all about a guy’s relationship and the subsequent breakup. michelle leaned over at one point and said how in hindsight it probably wasn’t a good choice of movie for me to see considering how i’ve felt recently.

it was a good film, but sometimes the movie hit a little too close to home.

afterwards we stopped at a target so i could get some nyquil to knock me out, also got some orange juice for some vitamin c. stopped at a mcdonald’s on the way back, and ended up seriously talking about how i felt and why i felt that way until almost 5 am. it was interesting to hear some things i had never knew, and to hear some things from other perspectives too and for me to express emotions that i just wouldn’t be able to express over an im conversation. i know that for months afterward i wasn’t the same; my boss had a meeting with me because of some silly mistakes i was making at work, friends said how i seemed different, and all the while i kept insisting that i was fine. maybe i was still in a state of shock to some degree? i don’t know. michelle said that it was good that i was talking out my feelings like this now, though: “what happened to the cool glenn i used to know?”, giving me a bit of a pep talk, and so on. as she put it, i was a “robot” for the past few months (though i thought this was a little funny since i just saw the “insane in the mainframe” episode of futurama earlier that day, and i could only think of “robot” as “robut” in dr. zoidberg’s voice). i crashed with the help of nyquil and stayed knocked out until michelle had to get up to go to work.

i’ve been getting into the “comedy central presents” stand-up comedy shows. i’ve never really watched them before, but just happened to turn on the tv while one was on and was really cracking up. it really depends on the comedian, but in general it’s pretty amusing. today, after watching some pre-recorded episodes of “match game 75” i started watching comedian sheng wang:

thankfully i’m not questioning pants and hygiene. still thinking about getting rid of my beard, though. maybe.

i started work on this lj post while sitting on my futon in my apartment, and suddenly i started shaking back and forth. i thought that maybe the tenant in the unit next door was having sex or something against the wall and it was causing my futon to shake, but as the shaking and rumbling intensified, i started to think it was a large truck driving up my street, or maybe some construction equipment. i looked out the window, didn’t see anything out of the ordinary, and realized it was an earthquake. 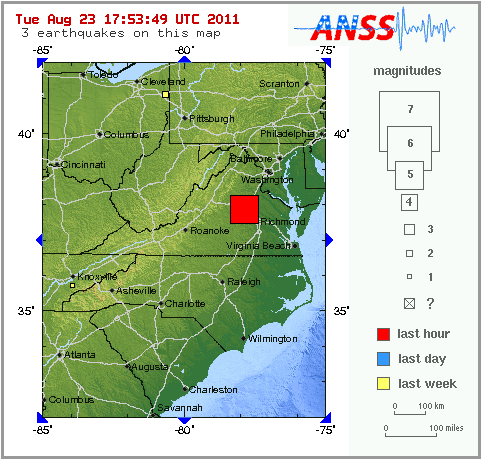 i thought about standing in one of my doorways, but just as i thought that, the shaking stopped. it all probably lasted about a minute altogether. that’s the first time i’ve been in a definite earthquake – i had woken up and thought i felt the bed shaking when i was last in japan, but i wasn’t certain. there was another time when an earthquake hit within the past year or so if i remember right, but i slept through that. this was definitely scary and freaked me out and i ended up sitting there shaking for a few minutes afterwards. no damage to the apartment as far as i can tell, and the only things that i could find out of place were a few bags that fell off my dining table and that was it.

i became super-sleepy after watching the news coverage of the earthquake and fell asleep on the couch for a few hours. bruno_boy came over once he got home from work and we talked about the earthquake and i told him how i’ve been feeling and how i’ve been trying to understand and come to terms with things. it was good to talk with him too. the more i talk out my feelings with my family and friends the better i’m feeling. i really need to not be so closed-up emotionally.

there was so much more that i wanted to do today, but i’ll have to do it another day. time for me to clean out my cabinets/closet for the maintenance guy to come by tomorrow to spray to keep bugs away, take some nyquil, and go to bed.