ever since we’ve rolled out net promoter score (NPS) at work a few months ago, i get an “I SEE WHAT YOU DID THERE” feeling when i see other companies do the same: 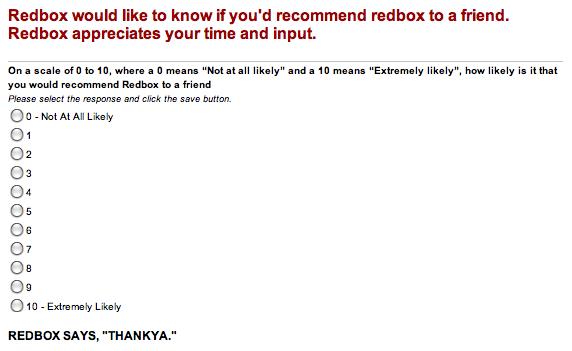 in other news, tomorrow is CCRG awards banquet, and then i’ll be going to my pal nick’s housewarming party for charity.

earlier tonight we were watching an episode of “monk” and one of the characters looked, acted and talked like fullmetalpussy, it was awesome.

i was talking with scooter81 earlier tonight about my homebrew beer kit and he told me about the sam adams homebrew contests. they’re kind of shady, though.

i also was talking with cynicalscribe yesterday at dinner about how i think that a lot of the fun about homebrewing is going to be thinking up clever names/labels for the brews. i did a search online tonight and i found a homebrew magazine that has results of their label contest winners online. some were pretty amusing, i liked for 2007 the ones for triple chocolate stout, “the humulus lupulus” (“does NOT taste like soap, no matter what my wife says”), “xxx porter” and “guinea pig porter” (“bottled at the source” / “i assure you it’s safe to drink”), hahaha… maybe on sunday i’ll start up my first batch.

i don’t think i really have any resolutions for 2008 (besides getting school finished), but i have a direction that i’d like to go; i’m interested in getting a place of my own sometime, and i’d like to actually work toward owning some property instead of renting. to do so means getting stuff like my credit card debts paid off, and it’d be nice to be making a few extra bucks to afford a swank pad. i’m still figuring out where i’d like to go — it’d be nice to find a place with some sort of basement in the city rather than a suburb, and while i’m drawn toward the atmosphere of dc more than baltimore, the cheaper pricing in baltimore is a definite plus. hrm.

but then again, there’s also some shenanigans i’ve seen out and about on lj recently about property taxes. it’s all so confusing sometimes. but then again on the plus side, my dad’s cousin is a real estate agent in the dc area…