so the other day i was talking with zenmetsu about taking care of roxy the cat while he’s away in kentucky, and i was chewing some orbit wintermint gum at the time: 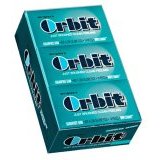 anyway, while i was talking with dan, roxy jumped up on my dresser next to me and sat there and looked at me. since she was kind of at the same height at my face, i did what any self-respecting bachelor does when their apartment’s cat decides to get close to their face while chewing something… i opened my mouth and did a sort of chew-and-show at roxy. her response was to stick her head into my mouth to investigate what was in there and find out why i had such minty-fresh breath (fabulous!).

dan started laughing, and while my mouth was open i started to hear a sort of “lick… lick… lick lick lick lick…” sound coming from inside my mouth. i couldn’t close my mouth because the cat’s head was in it, and i couldn’t feel anything going on inside my mouth, so i had to kind of grunt out “IS THE CAT LICKING MY GUM? OH GOD SHE’S LICKING MY GUM ISN’T SHE? I HOPE SHE’S NOT LICKING MY GUM. WHAT IS THAT CAT DOING??”, and of course dan is laughing too hard to notice and i was getting too paranoid to figure out exactly what was going on so i backed up and did a sort of open-mouth *ptooey* of my gum into the trash can.

on saturday we went to visit at aunt katherine and uncle harry’s place with our cousins brian (and his wife ashley), kiera (and her husband eric), monica, brendan and bridget, and grandmother and grandaddy. monica had to go to a concert so she wasn’t able to stay long, and brian and his wife had to go to a high school reunion or something, so they stayed a little bit after dinner but then they had to head out, but not before they told us about their cat “moscar” (original name was “oscar”, but ashley didn’t like it so she added the ‘m’ in front). apparently moscar doesn’t care for ham or turkey or tuna or anything else that cats would normally eat. apparently moscar loves greens — spinach, salad fixings… collard greens are his favorite, hah. i told one of my coworkers today about moscar and said if they put dressing on moscar’s salad they should use “cat”alina, bahahah…

we also got to see brian and ashley’s baby (dave) and keira’s dog (cassady? cassidy? however it’s spelled). i took some photos but haven’t edited them yet. i’d like to get some more photography done but i’ve been a) lazy, and b) annoyed at my computer for being so slow when editing with aperture and for my old former external hard drive eating my RAW files. not to mention that i’ve also been c) wanting to think of a good subject to photograph a bit of but i can’t think of anything interesting to do a little story on. i need some new content for my photography site!

and speaking of photography sites, yesterday i had a meeting with some of the photojournalism group i’m helping out by taking care of their website for them. since i was pretty much the only person who knew how to upload/update stuff on their site, i showed them the steps for publishing content and making changes themselves (it’s not hard work, it’s pretty simple, actually… it’s just a lot of steps that you have to go through in order to get the new features up on the site. one of the photographers has a studio/apartment in dc that he uses for work, so i met him for the first time and we had our training session there with him, bill crandall and my former photojournalism instructor.

so i showed them how to do different things with the website, just because it’s good for multiple people to know how to do things on there, and they had some requests for some changes to the site. i’m going to work on those changes shortly. i told them how my dad was going to be on tv that night (last night) for the history channel documentary on john wilkes booth and one or two of the guys got excited that he does civil war reenacting since they had wanted to or had tried to do some photography of reenactments but it was a little difficult since they didn’t have any person in the reenactment to use as a contact.

once i got out of there it took me forever to get out of dc; traffic was bad, weather was bad, and my gps didn’t work. hooray for google maps mobile to get me back on track! picked up cynicalscribe from her place and we went back to annapolis for dinner with the family and to watch dad on the history channel. (if you saw the history channel show last night, at the end when they find out that john wilkes booth is hiding out at the garrett farm, my dad’s the solider that’s banging on the farmhouse door and yelling something about blowing someone’s brains out, and when the farmer comes to the door he’s the one hauling the farmer down the stairs by his collar. then there’s a few shots of him as their surrounding the barn. the gun that the john wilkes booth actor is using inside the barn is my dad’s gun, and then at the end when john wilkes booth is dying he’s standing in the background, and there’s a final close-up showing him talking to the farmer’s wife or daughter or someone.) neat show! if you missed it, you’ll probably have to tape it since the next time it’ll be on tv will be january 2 at 8 AM and 2 PM.

afterwards we played cranium (carrie and i won! go ashtray!), watched “santa claus and his helpers” (one of these k gordon murray movies that end up being used as shorts in MST3k, it seems to use bits from “santa’s enchanted village” and “santa’s magic kingdom”), and then after mom and i presented carrie with our presents carrie and i headed back out for the night.

today at work it was sooo slow. well, like i said earlier, i was working on a 150-line disconnection, and that was taking up most of my day. shortly into the workday they said that us folks on the offline team could go home early if we wanted to use personal, vacation or unpaid time, and i figured that i’d just stay at work and not leave early since if i wanted to go early i’d have to use unpaid time. after lunch when i found i only had about 60 more disconnections to do (each takes about a minute to do), i figured i’d use 2 hours of unpaid time and leave early; that gave me 90 minutes to complete the disconnections (75 minutes, actually, since i still had to take my second 15-minute break) before i’d leave at 3:30. some of the people i work with have shifts that are 2 to 11 PM, and just before i left i heard something like the department was going to close down at 7 PM just because it was so slow today. i guess they’d just get paid time off from 7 to 11 PM… *shrug*. even when i first arrived at work, i heard someone on the phone team say that they were so bored that they were lucky to get a call every 30 minutes to give them something to do, and that they used to work in the call center for the consumer side and that it’s totally different over there on christmas eve with people wanting to find out where their orders are and such. i don’t even know why we were really open at all in the federal accounts team. at least they treated us to free fruit platters and bagels / cream cheese this morning, though. that was a pretty damn tasty bagel.

after work i went to the apartment to take care of roxy while dan’s away. now, when you visit my apartment, roxy charges at you as soon as you enter and doesn’t really leave you alone until you sit down, and then she sits down on your lap and won’t let you go. ever.

so she sat down on my lap once i got there to take care of the cat for the day, and she decided to sniff at my mouth again. i think this time it was just to smell my minty-fresh breath, though.

ok, now to get some of this metro collective site changed around, and maybe get the photos i took at my aunt and uncle’s place the other day edited before i go to midnight mass with anne in a few hours.