so i’ve mentioned on here before about how my statistics instructor often says “what” in such a way that he can (and usually does) answer himself, and i’ve started keeping track of how many times he does this in class:

on a whim tonight i looked at the wikipedia page for “deadwood” to see if there were any details about if/when it’d be released on blue-ray dvd. there’s no information about it coming out on hi-def dvd, but there’s this gem on the wiki entry:

yeah, they cuss a lot on that show. i think swearengen had a word-of-the-day calendar and just happened to take a liking to the word from september 14: 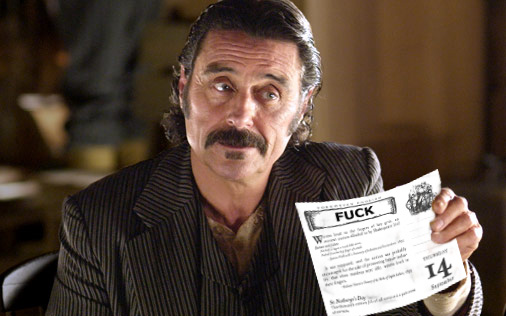 anyway, the interesting thing is that some folks decided to calculate the number of times “fuck” is said during the entire series of “deadwood” (not to mention the ratio of “fucks to cocksuckers” in each episode). what makes it even more hilarious is that during the time that i’ve spent actually in the classroom my instructor has said “what” in a way that he could answer himself with a rate greater than the rate they say “fuck” in deadwood. that’s a lot.

and yeah, the title of this entry practically wrote itself, hahahaha…