while i was at work today, “hot cop” by the village people came on my ipod — it reminded me of how at yesterday’s meeting we realized that the girl who volunteered to be our mascot might as well wear one of those sexy policewoman outfits. that kept me rofl-ing for a while on the job.

the next part that got me rofl-ing was thinking how chucklearious it’d be if at one of our bouts we had a promotional giveaway. know what i thought would be perfect for such a giveaway? well, i’m “killer glennuine draft”, right? just imagine: beer drink cozies with the harm city homicide logo on one side and me on the other, bahahaha… depending on how chuckles and awesome it’d be, i’d almost be willing to just buy the stuff on my own.

(and speaking of me as killer glennuine draft, when we were walking into virginia slim’s apartment i muttered “make way for the k-g-d~~~” as if i were lady sovereign and textureslut started cracking up, bahahaha)

how annoying, the “explicit” version of that music video for sale on itunes is edited to be a clean version. lame!

anyway, after work i had to take a letter to the post office and pick up some stamps as well. how nice of the usps to have these kiosks that help you choose the proper postage for your shipment as well as sell you stamps and such. the machine was so friendly, too! “please wait while i give you your stamps” and “please wait while i print your reciept”. that kiosk deserves a raise for being so friendly and helpful.

i found a .torrent last night of the police’s performance at virgin fest, and it’s pretty good for a bootleg recording. i found a photo taken from the crowd on flickr and set that to be the cover image for the album: 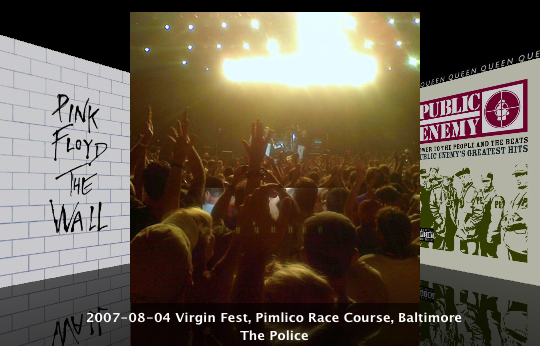 i don’t think i’ll try bootlegging the concert tomorrow, just so i can have more fun and enjoy the concert. …though it would be nice to have a recording of dweezil zappa in his dad’s hometown. hrmrmrmrm. someone already posted a recording of a concert in canada from a week ago that sounds pretty good, so i’m not too pressed about it.

also, that person making the ad for the beatnik barbershop that features my hair has mostly completed the ads: 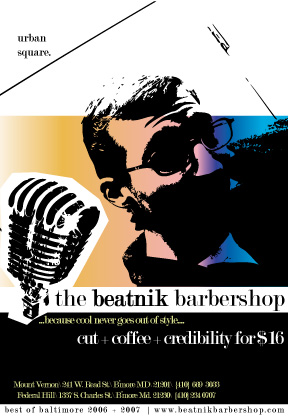 “urban square” indeed. 😛 i like the other ads a little bit better, but at least this is another step towards me booting out john waters as the one true local celebrity of baltimore. it’s like highlander, but with less sean connery.