…because anything’s better than to listen to an album by olivia newton-john.

work today was ok — same ol’ same ol’, still having to help out a lot on the phone queue. today was good though because my group had beat out the other group in the internet response team (we scored better in our quizzes and productivity and stuff like that) so we got a pizza party as reward. my lunch is normally from 1:30 – 2 pm, and i was scheduled for the pizza party from 12:30 – 1:30, so from 12:30 to 2 pm i got to sit and eat pizza and drink coke and do nothing. by the time i was scheduled for my pizza at 12:30, pretty much the rest of my group had already had their pizza so it was just me, a supervisor on guard, and 8 or 9 pizzas in one room. i almost thought i’d have to pull a hannahchan and do an “i ated too much” post, but lucky for me my ol’ coworker idalia (who is now in a different department at work) called me to see if i wanted to chat while she was at lunch so i went to the cafeteria to chat with her during the rest of my offline time.

open skate tonight wasn’t bad, it was less crowded than last week, and at least this time they didn’t get on the intercom to call out the roller derby folks. (well, yosemite slam claims they called him out, but i swear i heard them yelling at two girls instead. in any case, if they did call him out then that was uncalled for because the kid he hit had swerved directly in front of him as if the kid was trying to trip him up intentionally.)

me: “so, did you get your kneepads yet?”

cynicalscribe: “no… sin city skates said they’re going to try to get them to me by the tryouts, though.”

me: “ohh… well, hopefully they’ll arrive… kneepads are something that you… ‘kneed’.”

cynicalscribe: “so, my mom says that for a derby name i should be ‘hermione deranger’, but that’s probably taken.”

cynicalscribe: “i do scowl, this is true!”

she says i need to buy a certain shirt, and i actually really like the reason why, bahahaha!

even though there weren’t as many kids at skateland tonight, they were absolutely crazy — “when did it become ‘lord of the flies’ in here?!?” i ended up wondering at one point. kids were throwing skates around (and getting yelled at for that, bahah), stealing each other’s skates, pushing, shoving, and being all crazy kids. at one point during the guys-only skate i found a bearing housing on the rink and i scooped it up so nobody would trip on it. it actually makes a perfect ring! 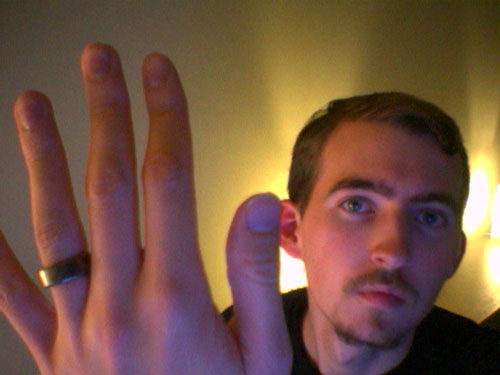 elvengrrl posted a link to the final scene from “xanadu”. i hadn’t seen the movie and didn’t know anything about it, but when i started to watch this clip my reactions were: