last night i was trying to figure out how to get the “vibrating sun” off my speedometer: this light came on a few weeks ago to tell me “hey, better get your brake pads replaced since they’re worn down”, but when i saw it i couldn’t figure out what it was until i looked at the manual. once i knew what it was i asked bruno_boy what he thought it might be and he said it means “the sun is vibrating.” good enough of an answer for me! zenmetsu saw it was still on and asked if i still hadn’t had my break pads replaced – “no, i still haven’t had them replaced,” i replied, “the sun does not take IOUs when i need to pay money to get it to go away.”

so on saturday i got my brakes replaced. $225! i got my tires rotated too (it had been about 6000 miles since my last rotation), but that was free since i had bought my tires from the same chain of stores. part of the brake-pad-replacing is replacing the sensor that tells you when to get your brake pads replaced, and they told me that it was replaced, but when i got in the car the sun was still vibrating!

i looked up about the brake pad sensor light on NAM, and all i found was either “it goes away by itself after a few days”, or “it doesn’t ever go away and so it’s easier to just unplug the sensor.”

well, that was saturday, and yesterday it still hadn’t gone away. i looked around some more and saw someone say “do the same thing to reset your flat-tire sensor, that resets this as well”, and someone else said “put your key in the #2 spot in the ignition for about 20 or 30 seconds and it’ll go away” (which it did). so yay, no more vibrating sun!

while i was looking up about this online i got to wondering about my “get your engine checked soon” light that likes to come and go as it pleases. everybody has said it’s because of the engine backfiring because of an airbubble going through the gas line, but i doubt that’s the case since it’s happened so often and so randomly. that, and the dynamic stability control light likes to come on and stay on as if i’ve lost traction so badly it shuts the dynamic stability control off.

so, i started wondering what’s the scoop on the 2007 minis! and oh, look, they’ve got a new yellow one! (they didn’t make any yellow ones last year 😛 this one is called “mellow yellow”, while mine is a “liquid yellow”) and all these fancy features too! so i played around with the configurator on miniusa.com and pimped this out: 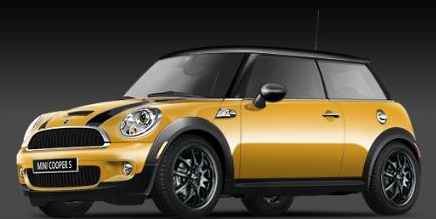 …and the kelly blue book value on mine now (three years later)? about $15,000. and that includes adjusting for the passenger side being keyed by a scallywag and my check-engine light being weird! hm… so, only about a $17,000 difference? that’s how much my loan was when i bought my car… but then again, no car payments is SO NICE. 😀 i do not need a second / replacement mini, at least not for a while!