stueypark and i used to play this game back back back in the day on my old apple ii+ called “intrigue”. neat game, but we never ever beat it (though we got close, we ended up being unable to dismantle the bomb with the virus in it and *poof!* went dc). the problem with the version of it that i had was one of the two disks were corrupted somwhere, somehow…. we’d try to press the key combination to reset the computer but the game would just say “DON’T PRESS ‘RESET’, YOU JUST LOST YOUR TURN!!” and we’d be stuck.

i had tried downloading disk images of it for my apple ii emulator, but these disk images wouldn’t even get past the screen showing that the game was cracked by “the bunnymen” and “the cookie monster”… it kept rebooting on that screen. well, finally, i’ve found some alternate disk images that work! 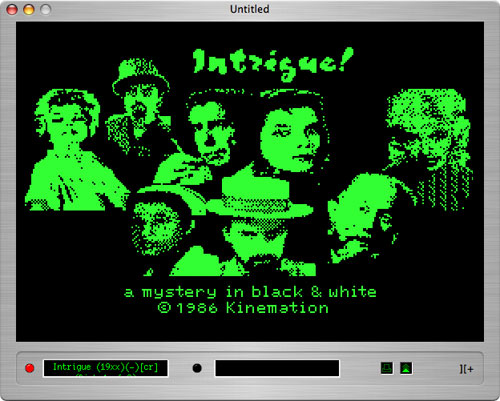 silly game, that looks more like black and green to me!

anyway, i just played a game of it and ended up accidentally blowing the bomb up in dc again. whoops!

in other news, spoothed has incriminating photos of me. a few of them i think are really. good.