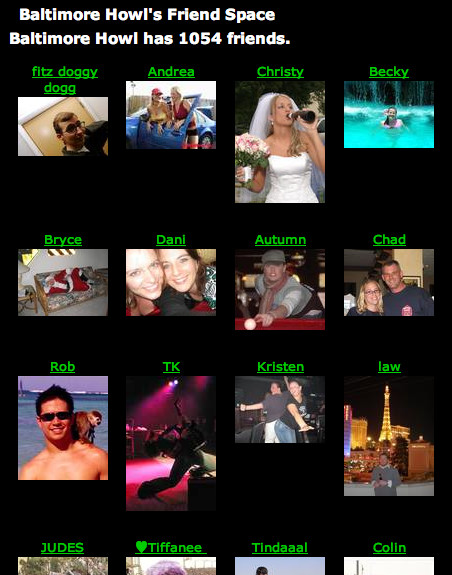 BAHAHAHAHAHAH! thanks to shortieterp for pointing it out!

so! last night i had a weird dream:

i dreamt that i was back in high school at dematha. bruno_boy was there, and i saw a few other friends that i knew there as well. it was supposed to be the last day of school and i was about to leave on a cruise, but i had a psychology textbook with me… i was required to bring the textbook with me and study while on the cruise.

i was sitting in a classroom in the old wing of the school, and a few teachers were in there. i only remember mr. baucia in there, though. one teacher came in and told him how he figured out how to get the elevator to work with the doors open, and then they let us leave the classroom. bruno_boy and i were in the hallway, and he wanted to go to arby’s – since i had to get ready for the cruise i told him that i couldn’t go there, at least not for long. for some reason while i was talking, one of my pant-legs kept riding up like i hadn’t used any fabric softener and i kept trying to pull that leg down.

then for some reason i remember waking up in a hotel room (or maybe it was the cabin on the cruise) and my friend paul (whose birthday i was at the other day) and his girlfriend were in the room as well. the cabin looked a lot like my bedroom in the apartment except larger and the walls were whiter, even like they were a shiny plastic.

next thing i know, i went to get something out of my closet and feisty_fitz and anne jump out – one of them jumps on my back piggyback-style and they both start trying to hit me in the kidneys as i’m trying to hit back at them. for some reason the kidneys weren’t called “kidneys” but instead they were called “the st. louis” (pronounced “saint louie”), so we kept shouting things like “OW! YOU PUNCHED ME IN MY ‘SAINT LOUIE’!! OW!! TAKE THAT!! RIGHT IN YOUR ‘SAINT LOUIE’!!”

then for some reason i tried to read the sunday comix, and there was a comic that was a pretty blatant ripoff of “peanuts” called “pullin’ december” (at first i thought it was titled “illin’ december” which sounds like the title of a beastie boys album) – in the comic, the “charlie brown”esque character pushed a giant snowball down a hill like he’s making a snowman and he was surprised when it ended up looking like my face… different characters would then come over in each panel and say “GLENN FITZPATRICK?!” when they saw the snowball.

and then i woke up.

went to work, not too much spectacular. came home, had pizza, watched american idol, my reporting for the media textbook arrived in the mail, met up with some coworker pals at our usual tuesday-night watering hole to hear coworker pal linwood play his piano. it was starting to snow when we left, and the other day when i was driving dad to pick up one of our cars from the mechanic i had seen a building on west street lit up all nice – figuring that it would make a good photo, and since i had my film camera and tripod with me, i parked behind the building, took a few pictures, and then drove home all freezing-cold. saw some other neat photo scenes in the snow once i got to the house, and though dad was about to get to bed when i arrived at the house he figured he’d come outside and take photos too. he ended up tracking in some dirt on the way back in so he swept it up, and some of the dirt was wet and left some smudges on the kitchen floor – he said “well, here’s an advantage to wearing dark socks!” and then cleaned up the smudges by rubbing his feet on them, hahahaha!