A Police Chase, an Intruder, A Frying Pan and an Arrest 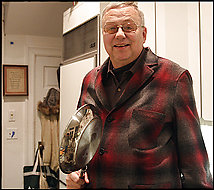 Gary and Trudy Peterson had finished dinner the other night when they heard what sounded like a wild police chase outside their Capitol Hill rowhouse.

Gary Peterson, a retired lawyer, opened his back door and saw a helicopter overhead and dozens of police officers near his house. Then he saw a teenager run into his yard — a youth who, unbeknownst to Peterson, was suspected of committing an armed robbery and shooting at police.

“He’s in here!” Peterson yelled to the officers from his back porch.

Suddenly, the teenager darted into Peterson’s kitchen. And then, at 9:30 Wednesday night, the two were face to face.

Without thinking, Peterson grabbed a copper frying pan and smacked the youth on the head.

“I think he was shocked,” Peterson, 62, said yesterday. “I don’t think he expected somebody like me to haul off and whack him.”

Peterson said his wife heard the commotion and told him to find out what was happening. “She said, ‘You better go check and see,’ ” said Peterson, who opened his back door.

Had he thought about the situation rationally, he probably would not have bonked the intruder on the head, he said.

“It was all reaction,” he said.

Inside the house, [Darnell Gant, 17,] called his grandmother, who came to the scene and eventually talked him into surrendering, said Cmdr. Diane Groomes of the 1st Police District.

“And we liked his choice of weapon,” Groomes said.