me: did you see the pictures i took today? 😀

carn_carby: are they on LJ?

me: i went to go find someone whose portrait i could take and ran into an anti-war protest

carn_carby: I’m going to link that to my friend if you don’t mind

me: i can’t wait to see how my black and white photos turned out

me: there were three people marching along dressed up – i’m trying to find a picture of what they were dressed up as

me: do you know of an old painting of george washington marching with two other people, playing a fife and drum and carrying the american flag?

carn_carby: That’s what it was?

me: i don’t know if that’s what they meant

carn_carby: That’s amazing that you recognized it

me: but it definitely reminded me!

me: i wish i could find a large version of that picture right now though

me: that’s the problem

carn_carby: are you sure that was goerge?

me: i’m trying to find a listing of famous revolutionary war paintings

carn_carby: if you think about it

carn_carby: why would george washington be playing the drum?

me: because he couldn’t sing and thomas jefferson already had lead guitar? 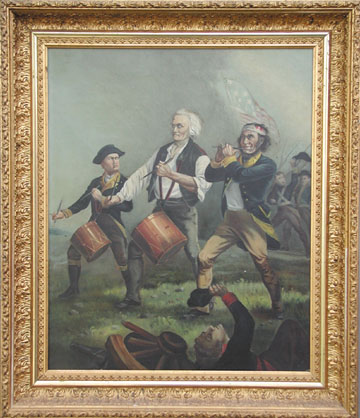 carn_carby: david: but then you see, Hamilton stole lead guitar

david: and Jefferson was like “fuck this shit, this is gay” and left

david: Then when the band finally went under

david: this guy Burr challenged Hamilton to a battle of the bands

david: and Hamilton died in the process

carn_carby: david: Burr was like “I’ll fight you for my honor, man!”

me: and the band’s name: “the 5th amendments”

carn_carby: so I sent david the link to the painting

carn_carby: david: That’s the Doc from Back to the Future!!!

carn_carby: david: see even the little guy to the right is “who the hell is this fucker and why does he smell like cheese?”

carn_carby: david: but the guy playing the flute