i need to set myself up as a sole proprietorship and get the appropriate tax and other paperwork set up.

we’re having our federal team “kickoff” in a week or two, and it’s going to be attended by all sorts of people within the company who work with federal accounts… it’s basically a cross between a corporate tradeshow and a party. they’re going to do a presentation about how we reached our 1 millionth federal customer during 2006, and they needed a picture of this sign: 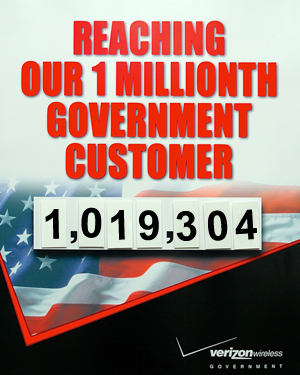 i had taken this photo a month or two ago, but they needed it updated with the total we had reached at the end of 2006, so i brought my camera to get a new photo but i didn’t have time to grab my computer. the people doing the presentation thought they’d get the photo today, but when i said that i didn’t have my computer i told them that i could just edit the previous photo to show the final total.

later i was telling drew (one of my coworker buddies who’s working with getting things ready for the kickoff) that it’d be nice if i could get “the wheels greased a little” (while making the universal sign for “money” by rubbing my thumb and first two fingers together) if they expect me to be bringing in my personal laptop and equipment for these photo shoots. well, he talked with his boss, and she told him that if i had everything in order for my photography to be listed as a business, then i should be able to get paid for these photography gigs, and she wondered if i can take credit cards (i can, actually, through my paypal account i’m able to submit invoices and payments can be made to me via credit card that way). everything just has to be all in order to show that it’s on the up-and-up.

drew said that if this all goes through, everybody benefits: the company gets a photographer that they already know and can use on short-notice for internal events, and i get paid! i’m thinking of probably something like $300 per event (meetings and other similar events), and $100 per art request (such as when i was taking photos that sign above and other similar displays at work). i don’t know what they currently pay when they need to hire someone, though.

it doesn’t appear that i need a license to be set up as a sole proprietor in maryland, but i still need to set up the appropriate tax information. i have also been thinking of setting up a more professional site as well. http://photos.glennfitzpatrick.com/ is all well and good for a personal photo portfolio, but if i’m going to want to do more gigs, then i’d really prefer to have a site separate from my personal domain.

(know what i noticed? the icon for the “maps” widget on the iphone is a map showing apple’s headquarters, hah! talk about subliminial!)