look! here’s the motoring friend i found this afternoon that i talked about in my voicepost! 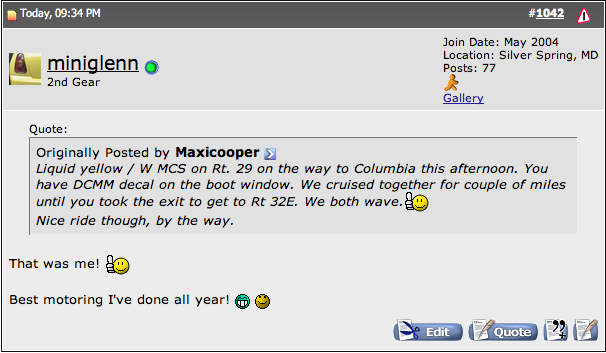 mine’s not a liquid yellow / white MCS, though. he should have said it’s a LY/B instead. still, i think it’s pretty funny and my parents didn’t believe me when i told them i found my motoring friend from today, hahaha.

so anyway, originally bruno_boy and zenmetsu and i were originally planning on doing shenanigans today. then xxxantiyouxxx said something about a snakes on a plane party, so i told dave that we’d need to try to get the shenanigans over earlyish so i could go to the snakes on a plane party. we tried to get a hold of dan to figure out what to do, but couldn’t reach him.

about this time mom sent me a text to see if i wanted to see “the pursuit of happyness” today. i told her it was too nice outside to see a movie and asked if it would be better to see it tomorrow, but she’s going with her sisters for one of my aunt’s birthdays tomorrow instead, so today was the only day.

i figured i’d come home, get some food, and at least see if my W-2 form had arrived (it hasn’t yet). since it was a nice day outside i figured i’d wash my car. i told stueypark about the idea of shenanigans with dan and dave and myself, but we four couldn’t think of something to do after i’d get out of the movie so we figured we’d do something some other day.

the movie was good, but it was a little bit tricky – it was a feel-good movie that had you not-feel-good in order to achieve its feel-good-movie status. what surprised me was the trailer for “reign over me” – adam sandler in a dramatic role?? this i gotta see. the movie comes out march 9, the day after i go to the next concert by the who, and the trailer in the cinema at least had music from the who as well (covers of music from quadrophenia, to be precise. i wondered if that was intentional when i saw adam sandler riding around on a scooter, hah!).

i’ve got to let the gas i have in my tank last through this next week, so unfortunately i don’t have enough to get up to baltimore for the snakes on a plane thingy. 🙁 🙁 at least i’ve got a clean car now, saw a free film, and get some free eats. i don’t know what i’ll be doing tomorrow, though. i think it’s supposed to reign rain.