last night we did karaoke: 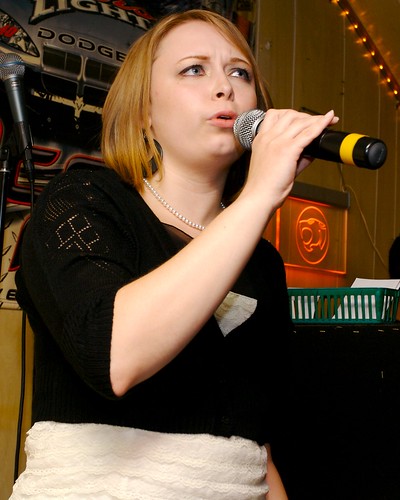 i sang “add it up” by violent femmes, and i think i did an excellent job with it! next time we karaoke i’ll have to hook up my microphones to my ipod to try recording.

tonight is new year’s eve. bruno_boy and myself are hopefully going to meet up with a few friends and do something, but who those friends are and what we’ll be doing is still up in the air.

2006 wasn’t that bad of a year, though it could have been better. i got to go to fun places (fly down to atlanta, road trip to louisiana and the crawfish broil, and mini takes the states), meet some fun people (raistlinvassago and knickee_lynn), and had some fun times. took some lucky-great photos and had some photos published for the first time. saw some great baseball. moved out of the house into a cricket-free environment. i’ve pretty much stayed in one piece (click at your own peril) (so far) this year, and got some hands-on healing from a maxim model. did some stupid stuff that i’m not going to tell you about, and some fun stuff that only i know about (like some great motoring), and depending on who you are you might have had some fun and good times with me too. had some bad times with getting into work (hence the “har har, livejournal” bit up top), my apartment almost burned up, and my finances went for a loop. thankfully i think i’ll be getting a big ol’ tax refund for this year, as opposed to always having to pay. transferred to UMUC. i saw some great musical performances (the who — their cd/dvd of that performance should be available any day now! — and dweezil zappa), and had lunch with john lennon.

2006 has had its share of ups and downs, but it feels like there’s been more downs than ups; hopefully 2007 will have a more positive feeling to it.

also, i got a kick out of this (posted january 2 of this year), especially after “peddling crack” to spoothed last night when talking to her about camera stuff:

new camera lens would be nice, but those are a hefty price. (i’m still wanting a 17-40mm L lens, and some variety of telephoto that i haven’t decided on yet.) i kind of want a tripod… or maybe a monopod. i don’t know what’s good when it comes to those, though. or maybe a flash? my rebel already has a flash, but another one from a different angle can really help in photos.