i’m SMART. it’s winter time, 20° F outside… wind chill that makes it feel like 11° F… and what do i do? i go running around indoors on ice! i did a lot better this time, and one guy who was on my team last time was on my team again this time and he said that i’ve improved a lot with getting the stones to curl the way that the skip wants me to throw them. i’m also happy that i’ve improved my weight and that i’m not throwing the stones too hard (most of the time) or too soft. now i need to work on my delivery – one of the guys who does the introduction classes was on my team and said that he noticed today that i was putting a bit too much of a shove on the stones when releasing and that’s putting them a bit off course, so i tried to correct that as best as i could. the guy who was on my team before also said that i wait too long before releasing the stone and so it doesn’t have as much power as it could have if i release it sooner. still, though, my team won and it was a pretty good match, and i’m pleased with how i’m coming along. there was also this guy there who’s originally from canada – he’s doing his masters in journalism at college park, and he asked me some interview questions for a paper he needs to write for his class (he came to the curling session to play, but also to get material for his paper). rock!

ooh, that gives me an idea for a funny icon/picture, hee hee! curling + frank zappa! hee hee hee! *fixes up some stuff in imageready…* ta-dah!

so i got back from curling and had to work on this research paper for my business writing class; i think i did ok on the paper, but i think it should have been a little bit longer. oh well, not much i can do about that now, especially since it was due at 11:59 pm and i got it in at the deadline. i was writing the paper on a business’ need for different types of communication (written/email vs. oral/phone/meetings), and i got to use some of the stuff i learned in that business writing class at work the other day when putting together this paper. the best part though was when i tried to scroll by clicking and dragging on the scroll bar to the right of the page, and i accidentally clicked and dragged an image into the document… i just love the topic of the page and the resulting image and just HAD to get a screenshot! see? 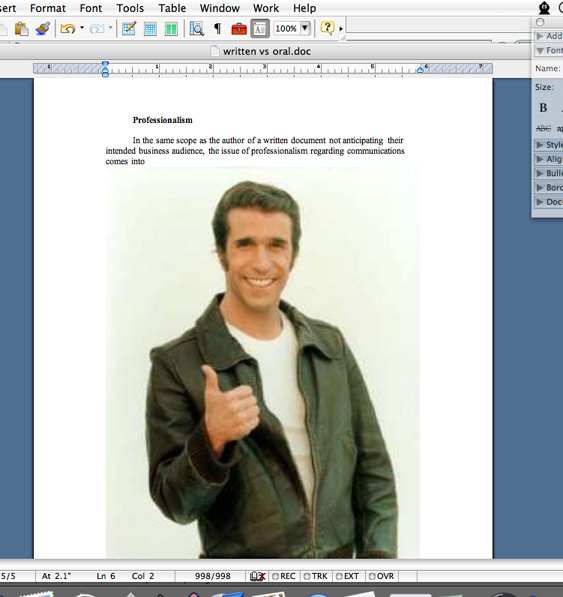 so, that’s what i did today. tomorrow: it’s a winter employee appreciation day, so we get to dress down and people get to bring their spouse and kids to work from 5-8 pm for a party, but since i’ve got no spouse or kids and since i get off work at 4 pm i’m not going to go. i’m also not going to go because i’ve got an exam for my communication for managers class tomorrow at 7 pm… i hope i do well!