my friend asya, the one who had the “mad hatter” birthday party? one of her friends i was talking with at her party invited me to a board/card/strategy game party on the 25th. unfortunately i’m going to see the who that day, but she said she’ll keep me posted for future game parties and for what they might be doing for new year’s eve. nifty!

speaking of parties, guess what i won for the 6th time tonight? haven’t picked out a date yet, though.

i got my bank accounts put into quicken tonight, so now i can keep track of the cash moneys. it’s a little unnerving disturbing amusing interesting to see more money having gone toward bank charges than food over a period of time. 😛 and speaking of food, tomorrow i need to see about finding some us senate bean soup for friday’s pot-luck dinner at work. tomorrow is also curling-day, but i don’t know if i’ll go or not; i’d like to go to get more practice, but alas, i need what little money i have at the moment.

the other day i was thinking of scarlett johansson, and since i had been in a mood to watch “lost in translation” i figured tonight was as good of a night as any to watch it; it’s been a long time since i’ve seen it. festive and spelchec arrived at the apartment just as i was starting it, and michelle asked if i was watching it so i could look at scarlett’s butt: 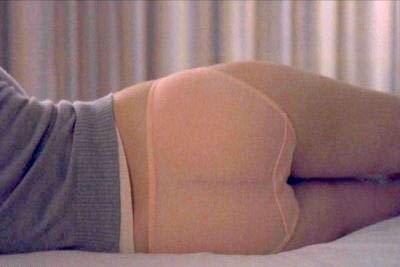 i had forgotten how sexy she is in this movie (and i actually prefer the way she looks in this movie as opposed to other films and photos), and until i went to her page on imdb i had also forgotten how old she is. only 21! 😀 apparently she turns 22 next wednesday. unfortunately, her imdb trivia page has to be a downer:

Shortly after Lost in Translation (2003) was released, she said she had a connection to older men and couldn’t see herself dating anyone under 30. True to her word, she had a relationship with actor Benicio Del Toro, who is 17 years her senior.

in any case, i do like her attitude and views in her quotes. some of them are a bit more interesting than others…

“I was driving through Los Angeles and I look up and see the biggest photo of me I have ever seen in my life on a massive ad space. I screamed and slammed on the brakes. I couldn’t believe it. It’s very strange to see my cleavage the size of a brontosaurus. My breasts were huge. I had long hair and my goodness, I couldn’t get past the cleavage.”

i suddenly have an urge to find this billboard and rent a crane on a cloudy, moonless night for a bit of thievery.

if anything, watching “lost in translation” makes me want to get back to work on my japanese and go back to japan. maybe sometime next year i’ll go back… i could probably pester homodachi, too!