friday night mytinyworld and bruno_boy came by to hang out; we ended up ordering pizza, and while we waited for the pizza to arrive we ended up playing baseball on the ps2. we found out the two best toppings to get on a pizza together: pepperoni and bacon = YUM. my name is glenn fitzpatrick, and i approve this pizza: 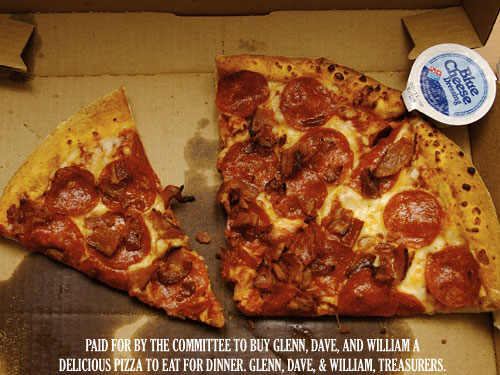 anyway, so at one point william quoted the movie “desk set” while we were eating, and i was right about guessing where the quote was from. after eating we watched “reservoir dogs”, and then for a short while we tried to figure out another movie to watch (most likely it was going to be “key largo”), but dave and i ended up playing another baseball game as a rematch.

yesterday i went with the family to the maryland science center to see “deep sea 3D”, an imax movie where you see… the deep sea! …in 3D!! i bet you didn’t expect THAT! the whole theater was rented out by my mom’s office (this is her group; katie is the girl mom’s trying to hook me up with… when mom asked why i haven’t tried talking with her yet i said that i didn’t know anything she liked as a way of starting a conversation and mom said “she likes verizon wireless!”… thanks, mom, i really want to talk about work as a way of introduction. :P) it was the first time that i had seen a 3D movie in imax (or anywhere), and it was very good and exciting to see jellyfish float up right in front of your face and shrimp that you could reach out and almost touch. it even had johnny depp and kate winslet narrating, and music by danny elfman. we even got free sodas and popcorn, and it was a pretty good turnout of around 300 people.

last night on turner classic movies they were showing “desk set” followed by “key largo”. i think ted turner must be spying on my apartment. watched “dr. who” on tv and mpt has this odd habit now of giving away half of the episode before the show even starts; they showed clips of what was going to be in the episode with a bad voiceover saying something like “OH NO IN THIS EPISODE DR. WHO IS GOING TO BE BURNT ALIVE BUT THEN OH WAIT WHAT’S THIS SARAH JANE MANAGES TO SAVE HIM EXCEPT GET SHE GETS BLINDED AS A RESULT. WILL DR. WHO ESCAPE? WILL SARAH JANE GET HER EYESIGHT BACK? ALL THIS IN THIS EPISODE OF DR. WHO.”… it made me annoyed because even though i had seen the episode before it was completely unnecessary, and also because the main character’s name isn’t “dr. who”, it’s just “doctor” or “the doctor”! way to act like one of the only two public television stations that still shows old dr. who episodes, maryland public television! 😛

i ended up staying at the house last night since i was too tired after watching all that to drive back, and i figured by staying at the house for the night i’d get free breakfast in the morning. 😀 woke up when mom turned on the tv and said that saddam hussein was found guilty, watched some news, had some lucky charms for breakfast, fell back asleep, woke up again later with savannah the cat on me, fell back asleep, and woke up again later for some eggs and toast. mmm.

i really should have spent the time since getting back to the apartment by doing something constructive, such as my homework. instead i’ve spent it by splitting the long audio file of the “zappa plays zappa” concert from a week ago into actual tracks, and by making this icon, and also by editing that picture of the pizza. at least i’ve been doing laundry while i mess with all this.