apparently even though i set my alarm for 1 pm so i could run my errands before the baseball game, i neglected to turn the alarm on, so when i woke up at 5:30 and wondered why i didn’t hear the alarm that turned out to be why. the baseball game started at 4:35, and i made it there in the middle of the 4th inning. i drove to my usual parking lot at the stadium and the guy that was there looked at me funny when i showed up – i said “hey, better late than never!” and he just waved me in. free parking! score! 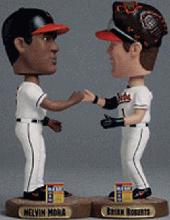 i had to go to fan assistance to show them my ticket to get my voucher for the brian roberts bobblehead they were going to give away at today’s game; because of a manufacturing defect, the bobbleheads turned out blueish (as the announcers said on the radio on my way to the game: “smurfs are good in cartoons but not as your second baseman!”), so instead of the first 20,000 fans getting bobbleheads, EVERYBODY at the game got a voucher that they can exchange for the bobblehead after september 1. it’s a pretty neat idea, it’s a 2-part bobblehead; brian roberts and 3B melvin mora end up doing a high-five hand-jive after an orioles win, and so today would have been the brian roberts one and in august they’re giving away the melvin mora one. i need to get a ticket for that game now too!

i saw a guy getting escorted out of the stadium for cussing – he kept telling the old-lady usher “you’re not my mother or my grandmother!” and she replied back “thank god for that!”… the guy was an ass, too – he was saying something like “well, i work at the nsa and so if any marks go on my record it’ll just be erased the next day!” what a retard. 😛

unfortunately, i didn’t get to see any runs while i was there (but i heard them all on the radio)… chris ray did an excellent job striking out the last three guys. way to go c-ray!

after the game i drove to penn camera to try to get the camera lens, but i guess they closed at 7 or 8 and since i got there after 8 they had already closed up shop. did some grocery shopping so i’d have some eats for dinner (by this time i still hadn’t had anything to eat today, and only a coke at the baseball game since i was so hot from running there). i’m going to order it on amazon.com instead (i can still get the rebate since i’m buying it on the last day of the rebate, and there’s no sales tax, and i think it’s actually a little bit cheaper too – woo woo!). i was going to get this uv filter for the lens to protect it, but maybe i shouldn’t considering the “before” and “after” picture! i guess “UV” means “Un-Visible”!

i’m debating going back to baltimore to go to mosaic tonight. hrm. i don’t know.