have you heard about “the poseidon adventure”? the movie made years and years ago (and they’re just now making a remake), about a cruise ship that capsizes and is floating upside-down underwater, and the people on board are trying to make their way around this upside-down ship? i had a nightmare last night that i was involved in something like that, and the nightmare actually woke me up. spooky!

the first thing i remember in my dream was being in london, and i was watching some band reunion on tv. i think the band’s name was “the green” or “the grass” or something like that. anyway, at one point i realized that the performance they were taping was actually right down the street from the place i was at. i don’t remember doing anything about it, though.

the next thing i remember was being on the ship with a ton of other people. we were in a giant sort of cargo room, and it seemed to be carrying a bunch of these sort of rubberized seats and harnesses, kind of like what you’d be strapped into for an amusement park freefall ride. these seats were all stacked on top of each other and they were heavy (they might have been secured to the floor, too), and they got smaller and smaller as you reached the top so it looked a bit like a mayan temple. there was also a fire engine in the room, also secured down so it wasn’t moving at all.

anyway, so i’m in this cargo room with a bunch of other people, and the designer of the ship is in there with us. i don’t remember anybody mentioning that the ship was going to encounter rough seas or anything, but the next thing i knew i was rolling over and over. actually, it was more like i stayed lying on the ground in one place and the entire room spun about me laterally. i remember laughing a lot at this point, thinking that it was all just a giant game, and once i stopped rolling i remember being surprised that i didn’t smash into this big yellow metal ladder in front of me that was part of the ship; i think it went up to some catwalk in the cargo bay. once we picked ourselves up, we realized that the room was upside down at this point, but we didn’t know what to make of it.

i don’t remember who called first, but i got two calls – one from festive, and one from dad. both said that they saw something on the news or somehow heard about my ship being in trouble. i told them that i didn’t know what they were talking about and was just excited about the bunch of fun i just had rolling around and around on the ship.

eventually we realized that we’d have to at least get out of the cargo hold, if not the ship itself, so we started to follow the designer of the ship. i think we went into an adjacent cargo hold that was exactly the same as the one we were originally in, but even though the ship was still upside down the stuff in this room was all right-side up, i think. everything was kind of bizarre… maybe the ship rolling over and over tossed some of the stuff about in the rooms, but nobody really noticed or was hurt by it? *shrug*

in any case, i remember lying down on the “floor” where i was when the ship originally was spinning around, and i looked up to see the designer looking at a blank tv that was mounted on the wall, and i don’t know if he did it or who might have done it, but someone pulled a lever that was to open an emergency hatch for the fire truck that was in the cargo hold. these big pneumatic rams started slowly opening up this hatch, and then i realized that the hatch was opening up in the “ceiling” right overtop of me. as i started to get wet i started to run away elsewhere in the room, and people started panicking that 25,000 gallons of water was about to come crashing down on top of us all. i grabbed a lifejacket, and started climbing up the ziggurat of seats and harnesses to try to get as high up in the room as i could.

the night before i had a kind of spooky dream also; i don’t remember much, but i remember driving my mini around these sort of country roads like what’s out in davidsonville, and there were all these people with other cars there too. i don’t remember exactly what we were there for, but i remember at one point driving my mini up this grassy rise to get it on to this field where we were all parking. i don’t know if the grass made my tires wet and thus slick, or if the hill was too steep, but later i was driving up this really steep hill with a large black man in my mini and the car started sliding backwards; i shifted into first gear and floored it, but the mini kept sliding backwards and backwards, and i wasn’t able to stop it. again, that’s one that i woke up from as well, except i wasn’t as scared in this one as i was in the one from last night. in fact, i kind of wished that i could go back into the dream to try different things to see if they’d get me out of this predicament.

today at work i had training on WPS, this wireless priority system so the government can talk on cell phones and not get booted off the networks because of high volume in case of emergencies. long story, but now i want cake and beer at work when we have parties, hahaha… i had also originally taken off on monday from 12-4 since my lunch was 11-12, so that i could work from 7-11 and then go from work to the o’s game. i realized today that monday starts our new schedule, and that i don’t have my 7-4 schedule anymore and that it’s now a 9-6 schedule with lunch from 2-3, so now monday was going to be working from 9-11, off from 11-4, and then work from 4-6. that doesn’t fit with a 3:05 baseball game! lucky for me that cheryl, one of my coworkers who’s also going to the o’s game, decided that she would just rather work her half-day (she’s getting the 7-4 schedule now) instead of taking off the whole day, so she and i swapped time off in the vacation system at work. 3 day weekend for me! yay!

i was debating waiting until it was closer to monday before i bought a ticket to opening day (last year i bought one online the night before), but when the online ticket system was only listing standing-room-only and club-seats, and i didn’t want either, i figured i’d take advantage of the o’s 4-pack to get a seat for opening day, a red sox game, and for two other games: 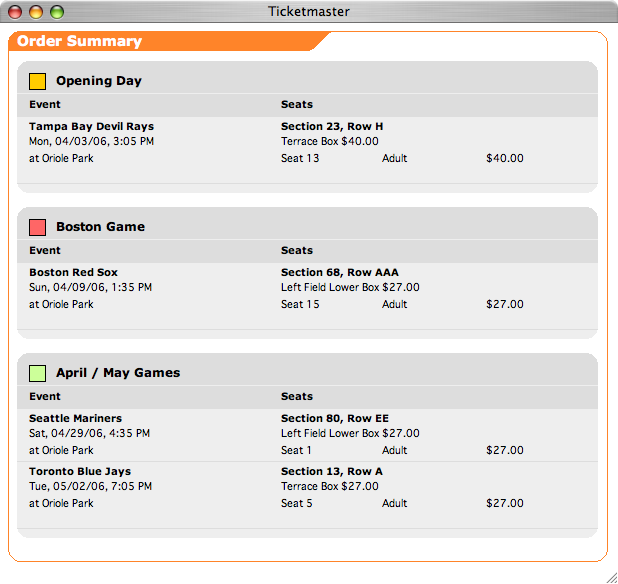 it took some tweaking, and i think they’re all good seats; get one up and close for opening day, a front-row seat in the outfield for the red sox game, a close to the front seat for the mariners game, and what i think should be another front-row (for its section) seat for the blue jays game so i can yell at bj ryan.

anyway, my work for tonight is done; now to go to bed. tomorrow: work, and then will try to swing by penn camera to pick up that 70-200mm f/4 lens that i’ve been lusting for so i can try it at the o’s games on saturday and monday. i wanted to get a polarizer with it also (i’ve been <3ing using a polarizer recently), but i think i'll just wait a paycheck or two to get one, and will just stick with getting the lens and a uv filter instead. if i really want to use my polarizer, i'll have to pop it on my 50mm f/1.8.