yay hockey, i was looking to see when different events were on (i couldn’t believe that nbc would be the only way to see the olympics in hi def, and i was right – apparently there’s a “universal hd” station going to be showing some

just in time, too… i started this post to talk about how this hockey game with the penguins vs. the capitals was already nuts, 3 minutes in and they’re already upset at each other. next thing i know this one dude for the penguins is dropping his gloves before the puck is down in the face-off, and he and this one capitals player start duking it out.

i found the game on (garth: game on!) when i found that universal hd station, since they’re just one station away from each other. it’s a very nice picture in hi-def; easy to see the puck. not as cheezy when some station – was it fox? upn? i forget – put a “tail” on the puck that would grow with the intensity of the hit, so it was easier to see after slapshots and such.

it was hilarious, they’re wailing away at each other, fall on the ice still grappling with each other, the refs break them up and send them away for their 5 minute major penalties, and then all the other players start banging their sticks on the ice while the fans cheer and the announcers remark “and off they go to the penalty box while fans and players alike salute the two warriors!!”, hahahahaha. i’ve forgotten how much fun it is to watch hockey, especially an intense game like this – it took that recent navy hockey game to remind me.

now they’re saying how apparently this game is the most anticipated game in terms of ticket-sales for the past two years for the capitals, and how they’ve definitely sold over their usual average number of 18,000-something tickets.

and jeez, during that previous paragraph another guy was sent to the penalty box, and now there’s a delay of game penalty! the announcers said that they won’t be surprised if this ends up taking 4 hours! 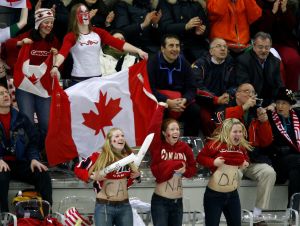