my bad, folks. i thought in my previous post that the flag bearer was edelfa chiara masciotta. nope, i was wrong – the olympic webpage has pictures and says it’s actually carla bruni: 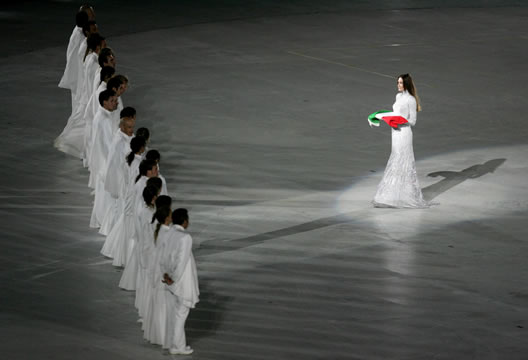 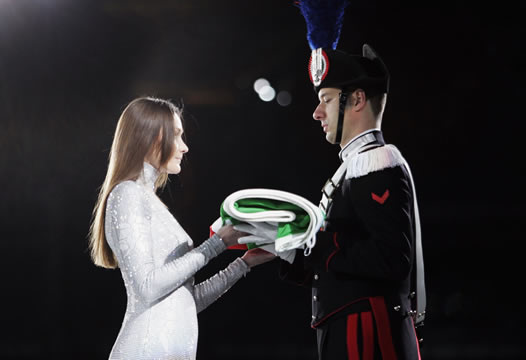 shiny! apparently not only is she a famous model, but she’s not that bad of a singer, either. she’s got an album where she sings all these french songs. i wouldn’t have expected that. it’s up on itunes, actually, and i’ve already added it to my shopping cart to get after payday. as for the modeling, the pictures i’ve seen online so far aren’t bad, but there’s something about her in that dress that i really liked and actually preferred over the nekkid pictures; it’s a pity that i can’t go back and watch what i recorded.

see, the good news is now i know her actual name. the bad news is that our dvr seems to have gone bad. oh, it’s recorded the show fine, perfectly timed at the beginning, fantastic picture quality. the problem is that the video goes incredibly jerky at points and only a minute into it the screen blanks out and the time meter shows incorrect data. it’s not a bad file as it does it at different parts, but you can’t get further than 4 or 5 minutes into it when fast forwarding it before it craps out. it’s been doing this for a while, but i forgot about it, and i wanted to import some scenes and such to my computer, too! phooey.

i guess i’ll call comcast to see if they can swap it out this week. that, and hope someone posts a torrent of the olympic ceremonies or i can find it up on a newsgroup or something; i’d figure the alt.binaries.hdtv newsgroup would have someone posting it. hrm.

on one hand i think i’d really like to go to the olympics sometime (though whether i’d go to the summer or the winter olympics i don’t know), but on the other hand i sometimes think that the international olympic committee goes a bit overboard, but on the third hand i can understand and appreciate why sponsors would want to be sponsoring the olympics and why the olympics needs its sponsors. in any case, i admit i get a little wistful and start wishing i were there when i watch the opening ceremonies. heck, i’d think it’d be awesome to actually compete in the olympics, but there’s not much for me to compete in other than attempting a gold medal in awesome. i can tell you that if i were there competing i’d be taking pictures and trying to chronicle as much as i could from the “inside”. (i guess if i really applied myself with my running it could – however unlikely – lead to me competing. but then again there’s so many things i suppose i could really do if i “really applied myself”. people just need to realize how awesome i am and let me do things without having to prove anything, hah…).

hrm. going to the olympics would have to be a michelle and glenn adventure, i think.

at work today i found out that i earned the silver quality medal for january – everyone’s audited to their calls that they handle for quality purposes, and for my team they pick 4 emails at random and score you on how you processed those calls. in the order that they told me, i had 100%, 81%, 93%, and 93%. i’m kicking myself because for those two 93% ones the only thing that i was marked down for was the way i address my emails to customers: i start my emails with “good morning” or “good afternoon” for my greeting. apparently they don’t want us to do that, so even though i thought they said it was ok to do when we had a quality team meeting shortly after i went into this position it’s apparently not ok. i guess i must have forgotten that part of the meeting, or missed that memo, or something. my supervisor said that if i stick to the standard greeting already in the email that i’d have no problem getting 100% scores. as for the silver medal, it’s given based on your average score – gold is something like 95+%, silver is something like 89-94%, and bronze is below that. they’ve also got distinguished customer service stars too, but who knows what it takes to get one of those.

also, apparently our furnace really is dead. they’re putting a new one in on tuesday. figures, we have an incredibly mild winter up until now, we’re getting a snowstorm tonight (8″-12″ we’ve heard on the news!), tomorrow, and maybe even sunday, and our furnace craps out. we’re using space heaters, and it hasn’t been too bad in here. still, it’s only been a few degrees warmer upstairs than in the basement. i didn’t want to get off the couch this morning; sleeping under 5 blankets or so keeps you snug and warm.