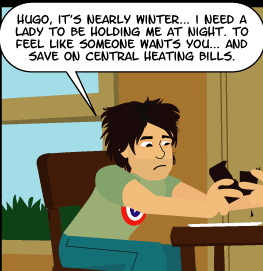 guess whose furnace broke just before the weather gets really cold? yup, that’s right! looks like i’ll be sleeping upstairs with extra blankets and maybe a space heater. maybe even a cat, too. the thing is, it’s not the furnace itself that broke, but rather the fan that blows the hot air elsewhere in the house, so while the furnace still turns on, the heat doesn’t go anywhere.

work today was so-so. we got cake today! about time, too – we were starting to get overdue! i’m really glad tomorrow is friday; this week has been bo-ring, even though i’ve only had to work tuesday-friday.

i feel like i’ve been making boring posts recently. everything’s been same-old, same-old. guess i’d better spice it up with sex! drugs! and violence! (seriously, though, that umbc murderer is creepy… i don’t even know yet if i had any classes or anything with him, either! spoooky~~…).

karaoke on saturday night! who’s in?? 😀