mom’s and my christmas pictures

– anne gave dad and i the harold lloyd dvd box set (i got dad the same thing, so now we’ve each got our own copy)

– mom and dad gave me a baltimore orioles sweatshirt and hat, picture frames, the entire tintin dvd box set (what i tried to order from canada and never got), a film noir dvd, a $50 gift card for penn camera, and probably something else that might be slipping my mind since i was typing this up from the top of my head.

after christmas at home we went to aunt sue and uncle ed’s place for christmas with my mom’s side of the family (probably around 30 people + 7 dogs… the dogs make me think of “a christmas story” since they’re always running around all over the place) – we had ham and turduckin (a turkey stuffed with a duck stuffed with a chicken), and some of the most potent egg-nog i’ve ever had. uncle eric made it, and it probably should have been called “jack-daniels-nog”, that’s how potent it was… dannyg2005 and i expected it to eat through the floor when i spilled a bit accidentally.

they also had a glennism wine: came back home and watched “santa claus conquers the martians”.

today, grandmother and grandaddy and uncle john came over for christmas; dad made a really good chicken dinner and afterwards we watched “safety last” from the harold lloyd dvd box set. (grandaddy and uncle john had a disagreement over whether or not this picture showed charlie chaplin or buster keaton, and dad and i knew that it was neither: 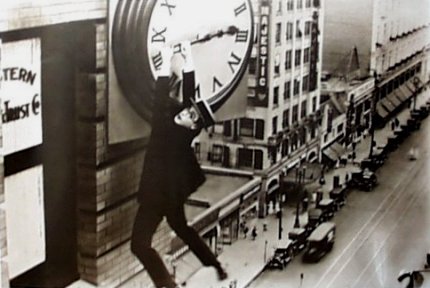 uncle john tutors english in san diego, and he recently did a project involving that picture where his student and he had to make up a story about what is happening in the picture, before the picture, and after the picture. incidentally, this site has some GREAT scans from old movies!).

tomorrow i have to go back to work. oh well. at least it’s only a 4-day week. i can’t think of what to do for new year’s eve yet, though.